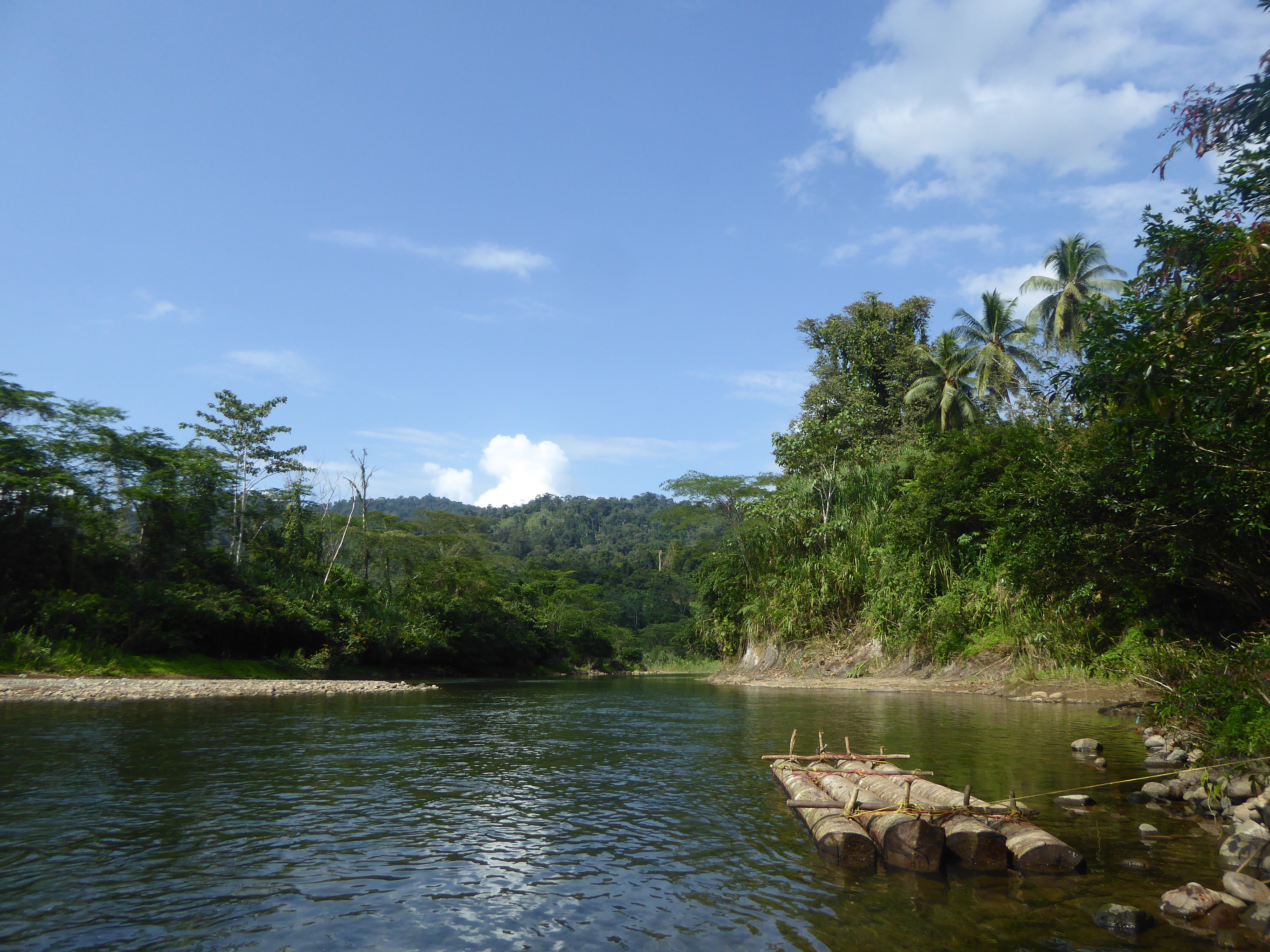 I was walking my way to the village of Yorkin, Costa Rica [map], when  I met Powell and his wife.  I had heard of an indigenous owned and run Eco-lodge, and I had decided to just walk in there.

After the first reaction of mutual defiance, we engaged in conversation walking down the path.  They were obviously lovely and caring people, and as we closed to the village, they offered me to come and stay at his place instead of going to the lodge.

The next 4 days, were spent hiking around his piece of land and on the steep slopes of the jungle around. Showing me his plantations, the local flora and fauna, and making sure I would taste every single edible plant his 35 hectares abundantly provided.

Among others, they were growing bananas, cocoa and coffee to sell to local industries and European importers, and I got to learn some of the tasks they carried out in their daily life.

This jungle is, indeed, thick with every kind of life, among which a few species of poisonous snakes, monkeys,  very secretive jaguars, and tons of amazing flora which I couldn’t name.

We would generally spend our evening in conversation, trying to understand each other. My host’s Spanish was excellent, given that his mother language was Bribri, but my Spanish at the time was very broken. Not only language was a barrier, we came from very different cultures, and I could sense it in Powell’s facial expressions and questions.

I surely was somebody strange, my speaking of the wonders and evils of my home country and the developed world let him sometimes showingly skeptical and nevertheless ever curious.

This is Powell’s answer to my candid question about their ancestral religion. I was expecting something really juicy as some variants of animism or shamanistic practice.

No. Instead of that, I learned that all what these people knew about their history started with the Spaniard’s arrival in the New World. Before that, was nothing. It looked like the question had even never occurred in his mind.

-As indigenous people, they do not need any kind of permit to build a house anywhere they like. They can just go there, and start clearing space and cutting wood for their houses, as long as it doesn’t endanger somebody else’s living. I imagine some intense negotiation with local community is a must.

-It doesn’t prevent them from having a quite tight forest management system. No tree shall be cut around the village or away from the river without a community issued permit.

-The least we can say is that the territory isn’t controlled in the same fashion as in other countries. Indeed, Powell’s house was located on the Panamanian side of the river, which we crossed several times a day.

On my last day there,  we loaded a boat with the organic bananas we harvested the day before to bring them for sale.

I was amazed of the price they got for it. €0.15 per kilo. Equally, they were quite doubtful of the approximate final price they would sell for : between €1.75 and €2.5 on the German market.

After I bid farewell to my host, I found myself waiting for Fernando to start the boat that would take me back to civilization, meaning the road.

As he asked me where I came from, I pulled out my smartphone to show him on the map. It soon occurred to me that he had never really studied a map, mistaking the brown areas for the sea. After I corrected him, I zoomed in and out over again to try and have him get an idea of the scale, and immensity of the ocean between our countries.

The old man waved at the sides of the widely outzoomed map, asking me his killer question :

‘Does it end somewhere?’

I was about to burst out in a huge laugh when I lift my eyes to look at him.
He wasn’t joking at all.

After a puzzled silence, I cautiously answered that the earth was a kind of ball travelling through space.

And his reaction to this was :

Then, after a short pause : ‘It’s good that our children go to school so that they can know all this things.’

The brevity echoed in my head.

I just couldn’t believe it. He had spent a whole life on a river he knew better than I knew my backpack (and he was the hell of a good boat driver), but when I told him the world he lives on was floating into space, his only reaction was : ‘Ok’.

For sure I will never understand what the mind of this man was like, how it feels to know so well your place without having any clue about the shapes of the world. Or maybe it was just the quiet tranquility of an old man who, knowingly coming to the end of his life, just didn’t care anymore so much about the novelties of the world.

Maybe that was it : he was just enjoying what he was having and what he did have.

Still troubled, I put my backpack on, and headed back to the bus stop that would take me out of the reservation.

It felt like my mind had been left wide open by forceps.

I had got a feel for what it would be like to meet a being from another world.